IoT With Satellite, Cellular Networks Brings Connectivity Off the Grid
BY CLAIRE SWEDBERG

OffGridBox, which brings power and potable water to remote sites in Africa and other parts of the world, is leveraging eze System connectivity—with Swarm satellite technology where mobile service is unavailable—so that each box can be monitored in real time or for analytics.

Oct 15, 2021In parts of East Africa, clean drinking water, as well as batteries to power lights and cell phones, are being delivered to residents from devices called OffGridBoxes. The intelligent, connected boxes leverage Internet of Things (IoT) data for global management and each is monitored by two local employees. The boxes, configured from standard shipping containers, filter water and capture energy from the Sun that can be purchased by local residents. The solution is provided by  OffGridBox, a technology company located in Cambridge, Mass.

The OffGridBox uses connectivity, monitoring and control technologies from Industrial IoT (IIoT) company  eze System, with cellular transmissions when possible, and the backup support of low Earth orbit satellites from  Swarm. The technology was designed to bring affordable clean water and renewable energy to remote locations. The OffGridBox retrofits shipping containers measuring 6 feet by 6 feet, 47 of which have been deployed to date throughout Africa. Each box is equipped with the solar panels and filtration required to produce electricity and purify water. The solution is targeted for remote areas that lack clean potable water and, for some families, the power necessary to light their homes and recharge mobile phones.

The OffGridBox, according to Emiliano Cecchini, the company's president and CTO, is designed to improve the quality of life and standard of living in such areas. The firm employs two local women at each site to support the boxes' operation. Only women are allowed to apply at the African sites, he explains, in part because women—especially young mothers—provide the best experience for the jobs at hand. That policy is in place in all countries in Africa, and the firm has experienced fewer thefts as a result. "It's a very strong part of what we provide," Cecchini states, "and we provide the training." 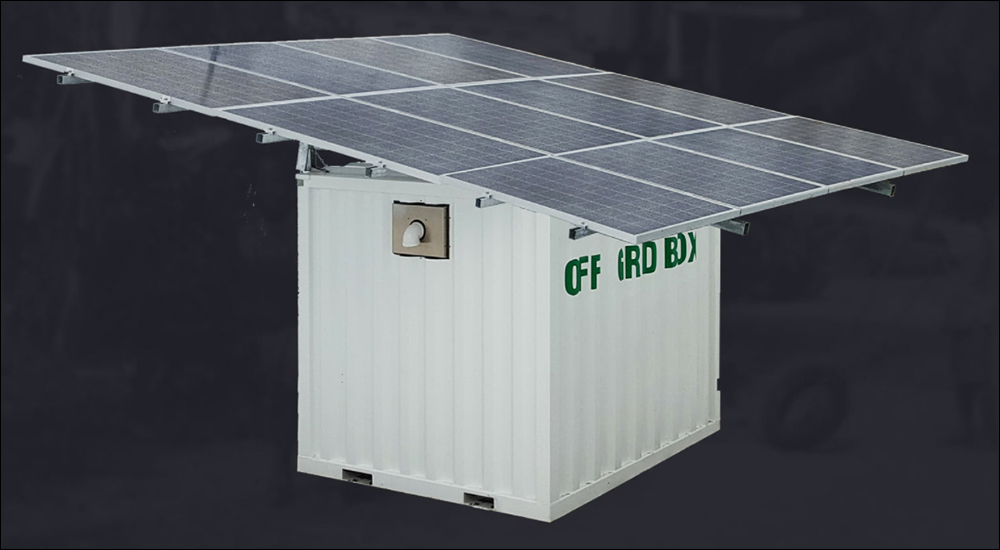 The OffGridBox gains its power generation from 12 or 24 solar rooftop panels. Each box offers water purification that captures any source of local water (such as a stream or pond), providing microfiltration and ultraviolet sterilization, as well as reverse osmosis in some cases to ensure drinkability. The purification system uses approximately 10 percent of the solar-generated power, the company reports, while the rest is collected in small lithium batteries known as power banks. These banks are recharged at the box and are delivered to area residents who pay an 18-cent fee to power their lights and phones and access Wi-Fi, and who receive a "jerrycan" (a food quality plastic container) of water.

Additional power can be made available for other devices, such as construction tools or ice machines. The box is deployed at locations where it can have access to a source of water. Clean, potable water is collected in the jerrycans and is then then delivered to shops in the area to be sold locally, or it's provided directly to homes. The system was launched in 2017, Cecchini says, when the Boston-area company set up headquarters in Rwanda to serve areas of that nation, as well as Somalia, Kenya, Tanzania and Congo. The boxes are manufactured in Tuscany, Italy.

One challenge of running the service, Cecchini says, is that each box requires remote management from various locations so that the company can view operational information in order to keep the system running, and to capture key measurements—such as how much electric power is being produced and consumed—along with any problems that might occur during the water-purification process. "Remote management was a major challenge," he adds. Many areas lacked cellular coverage, for instance, and traditional satellite data services were cost-prohibitive.

"We were facing so many issues on the connection for remote monitoring," Cecchini says. The box has leveraged cellular services whenever they were available, as well as Bluetooth, but the available networks were not reliable, he notes. "It didn't really work." OffGridBox thus teamed up with eze System, which now providing its ezeio system for remote monitoring, control and automation purposes. It embeds the required cellular unit and will include Swarm satellite connectivity going forward. In that way, OffGridBox can manage and consolidate deployed units while receiving alerts if problems arise, such as reduced function in the water system or power production. The collected data, he says, would provide management with analytics and the ability to compare data from different sites.

eze System, a Sacramento-based firm, developed and evolved an Industrial IoT solution over the past 10 years that is agnostic to any industrial equipment and is made for scalability, according to Thomas Weuthen, the company's VP of business development. The company has more than 6,000 cellular-based connected devices that are used around the world. The system consists of a single piece of hardware that can be connected to almost anything, he says. "It should be hassle-free and easy to use," Weuthen states. eze System is retrofitting OffGridBox's solution to deliver monitoring and control for each unit already in place, while providing its technology for all new units before they are deployed.

The ezeio controllers are small edge-computing devices with 2G, 3G or LTE-Cat M1 connectivity and GPS functionality, which can be configured according to a user's particular needs. "Part of what we do," Weuthen says, "is listen to our customers and convert their domain expertise into automation." Each box comes with a variety of interfaces that can be connected to sensors, actuators, flow meters and other industrial devices and equipment. The controller includes the I/O unit, a microprocessor and a gateway to transmit data to a cloud-based portal, where OffGridBox can remotely configure and manage deployed systems, set up alerts and manage data.

The technology is provided by eze System for the agriculture sector and other applications involving remote systems. "They only need this box and their own equipment," Weuthen says, "and they are up and running." Because there are places lacking cellular connection, however, eze System now provides the Swarm satellite connectivity as part of its service, with a Swarm Tile satellite device embedded in the controller. The Swarm network is intended to enable low-cost data access anywhere around the world, the company explains. Its network consists of two-way connectivity for IoT devices via satellites and the Tiles.

Several units at OffGridBox are now live with the eze System solution, which connects to the water pump, flow meter and other devices. Swarm connectivity is slated to follow. The retrofitting will require the integration of Tile devices and the installation of an antenna on each container's roof. "The Swarm system is super-robust and easy to install," Weuthen states. All deployed OffGridBoxes will connect to the cloud-based server via a cellular connection if one is available. In parts of Africa that lack terrestrial connectivity, such as Tanzania, eze's monitoring devices will automatically leverage Swarm's satellite network, pending regulatory approval.

"It's really exciting" from Swarm's perspective, says Sara Spangelo, the company's cofounder and CEO. "We built Swarm to be the infrastructure for this kind of deployment." Swarm currently has 120 satellites orbiting the planet, with between 40 and 60 more scheduled for launch early next year. The network already provides full global coverage, she says, with the low Earth orbit satellites passing between 20 and 30 times a day over any geographical location.

There is a gap of four to six hours between transmissions, but Spangelo estimates that number will be cut in half with the deployment of additional satellites. eze System plans to send 24 communications per day from and to each OffGridBox—12 for heartbeat information and another 12 for alarms and control commands. The connectivity enables the system to grow as more boxes are deployed worldwide, Cecchini reports. Analytics can be run on the edge by the controller, Weuthen notes, enabling OffGridBox to run analytics regarding the functionality of the equipment at each site, as well as compare with previous cycles and data from other sites.

Other technologies may be adopted as part of the system over time, Cecchini adds. For instance, OffGridBox could eventually provide RFID technology in prepaid cards for purchasing water, making dispensing easier. "We have a really cool map for the future," he says. In the meantime, there is a human element at each box to ensure the equipment's effective operation, and to disperse water cans and power banks with local customers as needed. "It's vital," he states. "It's the value of the company to get people to autonomously running the businesses."